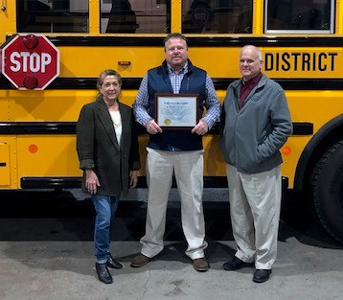 Feb. 2, 2021 – For the past four years, SSD’s Transportation Department has been working with the Department of Homeland Security’s Transportation Security Administration (TSA). In November, Kenny Mulder, SSD’s director of transportation, and members of the District’s transportation team completed the second tier of the Baseline Assessment for Security Enhancement (BASE). BASE is a voluntary, risk-based program that annually evaluates the security postures of transportation systems by implementing and sustaining baseline security measures specific to their operating environment.

SSD has been working with the TSA since the summer of 2016, with the first baseline assessment being completed in December. In 2017, SSD’s transportation staff began working through the Intermodal Security Training and Exercise Program (I-STEP) to enhance security and reduce risks in all transportation. In 2018, the District created a pre-trip unattended bag/item assessment to help emphasize the importance of thorough security inspections before picking up students. The exercise was performed at all three of the District’s transportation facilities. In 2019, the District held an Exercise Information System (EXIS) and was one of the first districts in the State of Missouri to participate in this type of drill.

“The emphasis was on responding to a disaster with special needs students,” said John Mueller, SSD’s director of safety and security. “The Safety and Security Department has been working directly with Kenny Mulder and the Transportation Department to develop strong prevention, preparedness, response, and recovery plans.”

“It was also recognized as the first exercise in the nation with a school district that is solely focused on special needs,” said Mulder. “This exercise was conducted to examine, through tabletop exercise, SSD’s implementation of transportation security focusing on the mission areas.”

After the completion of the tabletop drills, an action report was created that identified areas for improvement and work began with the TSA to develop a workable security plan for the District.

In November 2020, work on the BASE review began. The audit covered all current policies, practices, and procedures districtwide regarding student transportation. Scores are given in colored zones: red being the lowest, yellow in the middle, and green the highest.

“We moved from a red zone score to a yellow zone score,” said Mulder. “With a few more additions we will soon be a green zone.”

Working with the TSA, the District has been able to create a security plan that focuses on students.

“This partnership with TSA and SSD has allowed us an opportunity to strengthen SSD’s security posture and enhance existing relationships with other agencies as we all work towards a common goal of increased security preparedness to protect our most precious of cargo, our children,” said Mulder.

Transportation’s next step is working towards the TSA’s Gold Standard Award.

“The Gold Standard Award is the top recognition the TSA bestows to a transit agency for achieving the highest scores on its BASE review that evaluates 17 categories of security and emergency preparedness action items identified as fundamentals for a sound transit security program,” said Mulder.

Achieving this standard requires a review of the District’s security plan and training, additional training, drills/exercise programs, public outreach efforts, and background check programs. Mulder intends to meet the qualifications for the Gold Standard Award during the 2021-2022 school year.