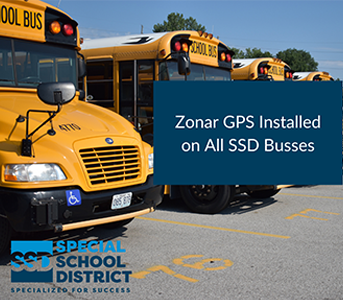 Recently rewarded with numerous accolades from the Missouri Department of Elementary and Secondary Education (DESE) and Missouri State Highway Patrol (MSHP), Special School District’s transportation department is adding a new feature to its bus service: Zonar Advanced GPS. With the new system, SSD buses can be tracked up-to-the-minute by the SSD dispatch team, as well as parents and students using the Stopfinder app.

The navigation systems have been installed in all SSD busses and transportation staff are being trained on the new software, with hopes of making the information available to parents early in the 2021-22 school year. Parents will be sent an invitation through email to download the Stopfinder app (available in Google Play and the Apple App Stores) when available.

“We’ve always had passive GPS, which means we know where the equipment has been,” said Kenny Mulder, director of transportation. “Now, with Zonar, I’ll not only know where it currently is, I’ll know how fast it's going, its location, and the route it’s traveled.”

Parents will be encouraged to set up three zones on their smartphone devices, which alert the parent when the bus has arrived at the selected location. Although zones can be placed anywhere, the student’s home and school are the two most common zones. The third zone could be a nearby intersection to alert the parent that the bus is just around the corner.

“With a zone option of a location close to the home, the parent who relies on kids to get themselves on the bus can call up their child and let them know, ‘Hey, the bus is almost there. Be ready,’” added Mulder. “This will also help cut down calls to our dispatch team. Parents will have the ability to see where the bus is in real time, so they won’t have to look up our number and go through the process of calling.”

If a student misses his or her bus in the morning, dispatch can pinpoint the street address, then instantly determine which bus is closest to the child’s location for a rapid pickup.

Transportation will also have access to a bus’ entire route, determining how fast the bus is traveling, whether it’s stopping at railroad tracks, and even if there’s excessive takeoff or braking.

“It’s all about safety and the bus drivers are being held accountable,” said Steve Crawford, representative of Zonar Advanced GPS. “This way, we can tell that the drivers are truly driving safe. You’re giving your kids over to someone who you don’t know and just trusting them to not only deliver and pick up your child on time, but do so in the safest possible manner.“