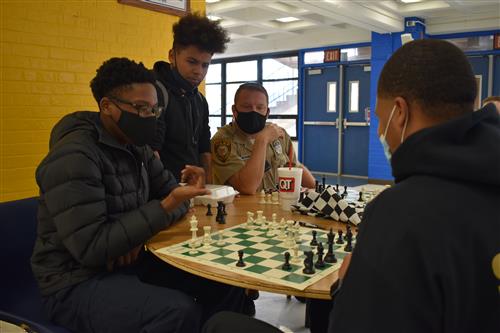 November 17, 2021 - Most students use lunchtime as an opportunity to relax their minds and take a break from the hustle and bustle of the school day. But for some students at North Tech, it’s the time when they put their game faces on and come up with strategies to be named the winning champion in a game of chess. Since the beginning of the school year, School Resource Officer Neil French has been playing chess with North Tech students during their lunch period.

“They get really excited when they checkmate me which is fun, but honestly, I’m not that good compared to the chess world,” said French.

The idea came about after French incorporated chess into law enforcement teachings inside the classroom. French says the game is all about being two or three steps ahead of your opponent and that relates to how law enforcement officials need to be prepared to handle any situation.

“He would come down to the law enforcement classroom and we had a lesson learning how to play,” said senior Marc–Anthony Stovall.  We would play every day in class and it carried over into lunch. It’s a good strategy game.”

French says that interacting with students in a social setting is one of the best ways to get to know them and build that relationship as a mentor and police officer. He also says it’s a great learning experience for those who are beginners. Senior Demonte Haley did not know how to play chess prior to getting involved but has improved his skills by watching his classmates.

“I just saw it and decided to join in and kept playing ever since. I’ve picked it up by watching and seeing how the pieces move. It’s quite fun,” said Haley.

Around 10 to 15 students participate every lunch period. Senior Camren Scaife says that having Officer French involved makes it an even better experience.

“He’s like the coolest police officer ever. You can talk to him about anything. He’s like a counselor,” said Scaife.

Every day after lunch, the winning player gets to carry around a black chess themed pen and then compete to keep it the following day. French says that anything the students want to do, he is up for it.