July 1, 2022 - Students from South Tech just returned from the SkillsUSA National Leadership and Skills Conference, held June 20-24 in Atlanta, Georgia, with some hardware! Our Web Design team won bronze after an intense, all-day contest against coders and designers from career and technical schools nationwide. 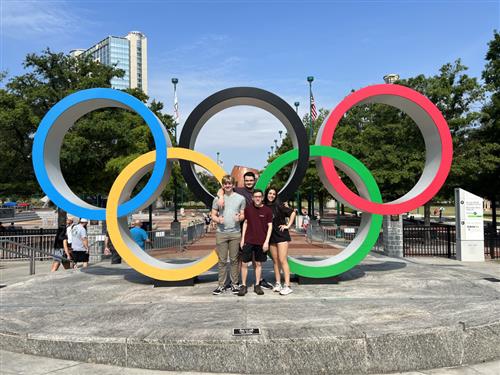 Parkway West, Zach Hendrix of Mehlville, and Alex Carron of Lindbergh, traveled with principal Jacob Lohse to compete in their skill areas. “The best part for me,” said Lohse ”was watching the students as they prepared for their competitions. Seeing them work through their anxiety and then how proud they were of themselves when they finished was just great.”

For Hendrix and Carron, competing meant a job interview, a coding and design exam, and a marathon, 8-hour website build. Teams kicked off the contest by meeting via Zoom with their website client and gathering information about their needs. They then launched into their build, created entirely from scratch, to produce a fully functioning website that would go live at the 8-hour bell.

To compete at the national level, students won at both district and state competitions held during the school year. The national conference hosts multiple opportunities for students to network with business and industry professionals, engage with fellow CTE classmates, and learn from some of the top leaders in the country.  Miguel Cardona, U.S. Department of Education Secretary, was a keynote speaker and shared that he had been an automotive technology student in high school. SnapOn CEO Nick Pinchuk also addressed the 6,500 students and applauded their commitment to helping grow and maintain a diverse workforce.

While in Atlanta, the South Tech competitors also visited Olympic Park, the Georgia Aquarium, and the Coca-Cola museum. “It was fun - we all had a really good time,” said Lohse.

Learn more about SkillsUSA at skillsusa.org. South Tech programs can be viewed here.