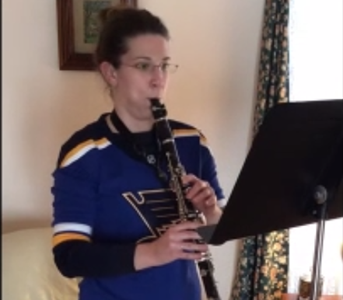 Nov. 19, 2020 – Many music lovers will immediately recognize the opening bars of the clarinet solo in George Gershwin’s “Rhapsody in Blue,” as it’s one of the most often-played stanzas in the entertainment world. But even the most experienced music fans had to have heard the song for the first time at some point in their lives. For many Ackerman students, Nov. 18 was that day.

Clarinetist Lauramarie Olesnicki performed via Zoom for several students and staff members at Ackerman as part of the Performer Spotlight Series. Ackerman music teacher Stephanie Ward had the idea to create the series in order to highlight a different musical performer each week, and host it on Zoom so that even if students, staff, and performers couldn’t be in one place at the same time, they could still learn about and hear different types of music.

Olesnicki performed both “Rhapsody in Blue” and “Nocturnes” by Frédéric Chopin, and followed that by speaking with the students about what a clarinet looks like, how it’s made, and how it works. She also took questions from the students, which included asking if she gets nervous while playing and how much a clarinet costs.

“Our performers each represent a different family of instruments,” Ward said. “Hopefully this will give our students a more thorough look at how someone could find involvement, or even employment, in the music world.”

Olesnicki was just the second performer in the series, with vocalist Mark Saunders having performed for the students a week prior. Upcoming in the series are a violinist, drummer, and French hornist. “As an extra tidbit, one of our performers is on the autism spectrum and is very excited to perform and talk to our students to be an example of how he does not feel his success or ability are limited,” Ward said.

One student, who had previously heard a clarinet at a talent show, said he liked the instrument. Another student mentioned how he didn’t know much about the instrument before today but learned a lot from the presentation.