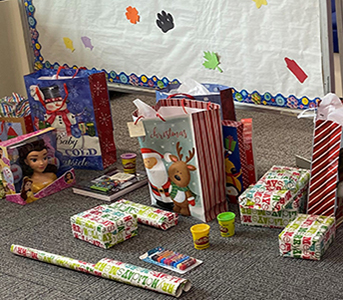 The program now known as the Litzsinger Giving Tree started as a one-time school effort to help a family that was in need. But this year, nearly two decades later, it helped provide for 22 different Litzsinger School families.

“It is a flurry of collaboration and many needs are met in a very short period of time,” said Litzsinger school nurse Debbie Tuitasi. “It kept snowballing into food and gift cards.”

It all started about 20 years ago when a student’s family had a fire at their house during the holiday season. According to SSD social worker Kelli Traxler, so much was lost in the fire that everyone at the school wanted to help the family. A wish list was made, and members of the Litzsinger staff all contributed to help the family. And from that, it grew into an annual tradition.

Now, SSD social workers interview teachers and staff to compile a list of specific items or gifts for students and families that may have specific needs that have been identified. Most years, the items are written on a paper ornament and hung on a tree in the front office. Staff choose an ornament and purchase the item and return it to the social worker for anonymous distribution.

“Never has an ornament gone unfulfilled,” said Tuitasi. “We have an extremely generous staff as people jump in and are so supportive of these kids.”

Social worker Wendy DuCassé had concerns about this year’s Giving Tree with 2020 being such a unique year. “Our need increased with more families being out of work with the pandemic,” she said. “I was also a little nervous about this year as many of our families are struggling, so might our staff be.”

But according to social worker Dwaine Tipton, the staff raised more than $2,200, which helped 22 Litzsinger families. “Even though it was such a huge amount given, there are always needs,” he said. In order to decrease contact this year, the donations were made using Venmo and other similar contactless methods. And they did away with the ornaments on the tree this year for the same reason.

“Some people just didn’t have the basics, so we had to rally at the last minute,” DuCassé said. “In my five years here, this was the most we had to do last minute.”

“Miracles,” according to Tuitasi. “Those situations kept happening where social workers were already out delivering gifts and they’d see another need and ask if we had any more money in the food fund that our nurses’ office keeps.”

In total, along with the gifts, the Giving Tree program was able to provide more than 30 holiday dinners to families, many of which were picked up at the very last moment.

“With this being my first year at Litzsinger, it has been amazing to see,” said nurse Abby Heiland. “Honestly, the staff has been so generous. It’s an awesome place to be.”

Perhaps DuCassé said it best: “There are so many elves in our building, we just get to drive the sleigh.”