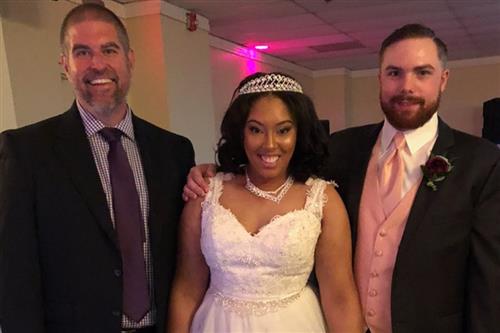 Electrical Trades senior Nicole Russel didn’t have a date yet for prom in 2014 and was trying to finish her handmade dress. Fortunately, her friend Bill Wood had offered to help her by buying some of the materials she needed to finish the gown.  He may have taken a bit longer to ask her to go to the dance with him, but it turned out the wait was worth it. Four years later on September 21, 2018, Russel and Wood had another memorable date – their wedding. But what makes their story most unique is that their ceremony was officiated by their former high school principal, North Tech’s own Jim Hieger.

“I told him, that girl likes you!” said Wood’s precision machining instructor Brett Smith when he described the romance he saw beginning between the couple.  “She came down to visit him a lot,” he said. Russel was a driven student who had jump started her two year program during her sophomore year, leaving her time at the end of senior year to take an extra class in production engineering.  “Mr. Galati let me do some additional course exploring and I would visit machining a lot. But I wasn’t there because I was interested in the class!” she said, “I was there to see Bill.”

Russel and Wood had both come to North Tech their sophomore year from Jennings High School.  They quickly became close friends here and were standout students in different ways. Russel was “very outgoing and very involved in school,” said Hieger who served as an assistant principal when Russel and Wood were students.  He said Wood was very quiet, reserved and serious about his machining studies. Both have become highly successful alumni and continue serving students at Tech today.

Russel has been featured in outreach pieces by her current employer, Spire Energy. She credits Hieger, guidance counselor Jeff Chandler, and her instructors Galati and Fenoglio for all their support as she began her career.  She also remembers fondly that Hieger was kind to her, even when she got in trouble once for having her phone out during class time. “I still had a consequence, but he was really nice about it,” she said. Wood began an internship with Tool Specialties during his senior year at Tech and has continued his career there, where he also serves as a mentor to students in our Precision Machining program.

On a visit to Tech last year to volunteer during our school’s Open House, Russel was discussing her upcoming wedding with Hieger. “We were planning and I told him we were looking for someone to officiate,” she said, “and he said he could do it!” Heiger had become an ordained minister 15 years ago to perform a wedding for a close friend and renewed his certification for the service. “He was awesome!” said Russel. Hieger respected their requests for a short and simple service that included a sand ceremony.

While waiting in the wings for the wedding to begin, Hieger recognized the nervousness that grooms often experience in Wood. In his usual fashion, Hieger knew what to say to bring comfort. “Look, man,” he said, “I’m going to be doing most of the talking.  I’ll ask you a question and you say ‘I do’ and that’s it!”

North Tech has helped thousands of students through the years find their passion, strengthen their skills, and build their futures, but we are confident this is the first time one of our administrators has taken their commitment to our students to this level. Best wishes to Nicole and Bill!