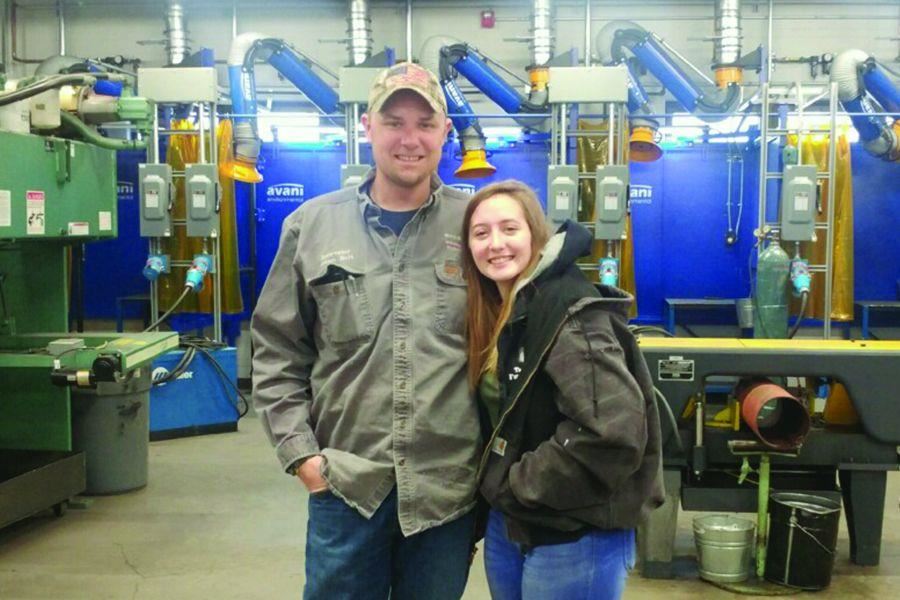 Lily Bedwell doesn’t shy away from a challenge, so when she was told to shoulder 300 pounds of rebar, she marched right up to the pile and did what needed to be done. “I wasn’t the only one who needed help hoisting it,” she said. Many view Bedwell’s career choice as non-traditional, a term used to describe career paths commonly sought by one gender.  When asked if she found that term troubling, she said “I don’t find it offensive at all. I instead respond with positivity and stay motivated.” Having a minority status in her pre-apprenticeship class at Local 396 Iron Workers is clearly not going to be a problem for Bedwell.

Bedwell graduated from South Tech’s Welding program in 2017, then applied for and was accepted to Local 396 in June.  She chose to pursue this career because she enjoys the work, she is excited about earning money while she is training, and because the skills she will learn are in demand all over the world. “I’m going to see as much of this planet as possible,” she said. After completing training, her prospects are outstanding. The Bureau of Labor Statistics predicts faster than average growth in this profession that will help rebuild an aging infrastructure in the United States and abroad and young women in the trades are more likely to be hired as firms strive to embrace diversity.

Bedwell will start her traveling a bit earlier than her fellow students as she was chosen to participate in a special 3-week course specifically for women in construction.  The 180-hour course will take place in Benicia, California and include mentoring on a large portion of the pre-apprenticeship curriculum. Bedwell’s current employer, Hollyberry Catering, has allowed her to take time off for the conference.  Bedwell supports herself by working full time for Hollyberry while attending her pre-apprenticeship class from 6 pm to 10 pm each night. Once the pre-apprenticeship course concludes, Bedwell hopes to begin her paid apprenticeship in September.

Bedwell is thrilled with her experience so far, as was evident when she recently visited with students in the welding program.  She shared information about how others can apply for apprenticeship programs along with her experiences thus far in the pre-apprenticeship course.  The challenges she will face would be discouraging for some, but Bedwell views them as fuel to energize her natural “I’ll show you” attitude. “You are the creator of your own destiny,” she said.  With such determination and dedication, we will certainly be hearing future stories about her success.